Straight up, I have a real soft spot for railway stations. Especially disused ones in nearby historic colonial towns that don’t involve breaking any pesky trespassing laws to look at.

Situated 45km south of Sydney CBD, Helensburgh township (FKA Camp Creek) was established in the 1880s as a workers’ camp for the influx of coal miners who flocked there when coal was discovered, with much fanfare in 1884.

Today, Helensburgh has that sweet, slow paced country kind of vibe. As soon as you approach the town’s main street, a sense of being on the outskirts of Sydney hits you. In fact, although it’s closer to Heathcote, Helensburgh now actually falls under the the juristiction of Wollongong Council.

The ‘Helensburgh Tunnels’ actually refers to a group of seven now disused train tunnels stretching between Waterfall and Otford. These stations together made up the original section of what’s now known as the  Illawarra line. Opening in 1889, the South Coast Railway as it was then called included:

These seven tunnels were created by boring through the Bulgo ranges. The old Helensburgh Tunnel  is one of the shortest on the alignment and sits at the bottom of the gully, sandwiched between the steep rock cutting of the man-made divide.  It’s relatively short drive (or walk if you’re a fitness fan) down the winding road and at the bottom of the hill, just to your left is a dirt track off the suburban road. Make your way through the open air corridor and straight ahead, in the middle of a beautiful patch of sub-tropical rainforest is the gaping entrance to the tunnel and remains of the old station. 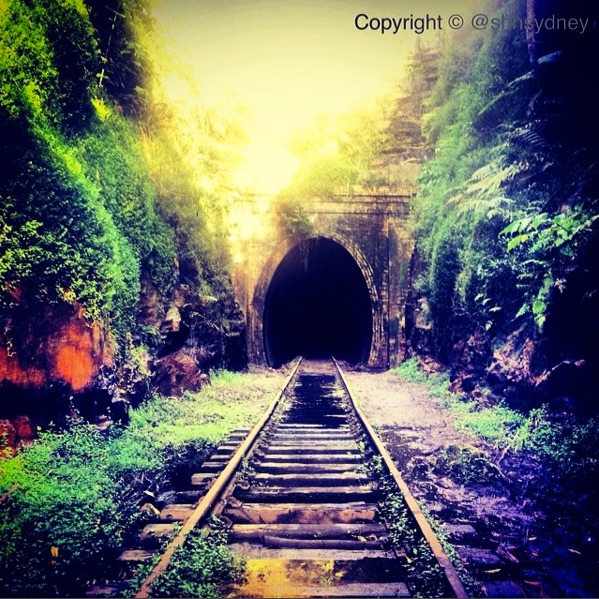 The elliptical shaped archway and handcrafted brickwork along both the tunnel and platform’s facade gives a distinctive sense of that quaint, Victorian-era charm. Walking through the cutting and surrounded by the sights and sounds of the bush feels like being instantly transported to a long forgotten world…it’s a lot like that classic children’s book The Secret Garden and it’s hard to imagine how different this deserted area once was – a bustling, loud train station overflowing with commuters and goods! Interestingly, the visible gentle curve along the length of the platform you can still see today (albeit now sprouting a few ferns) is actually a hallmark of early steam railway systems and design. 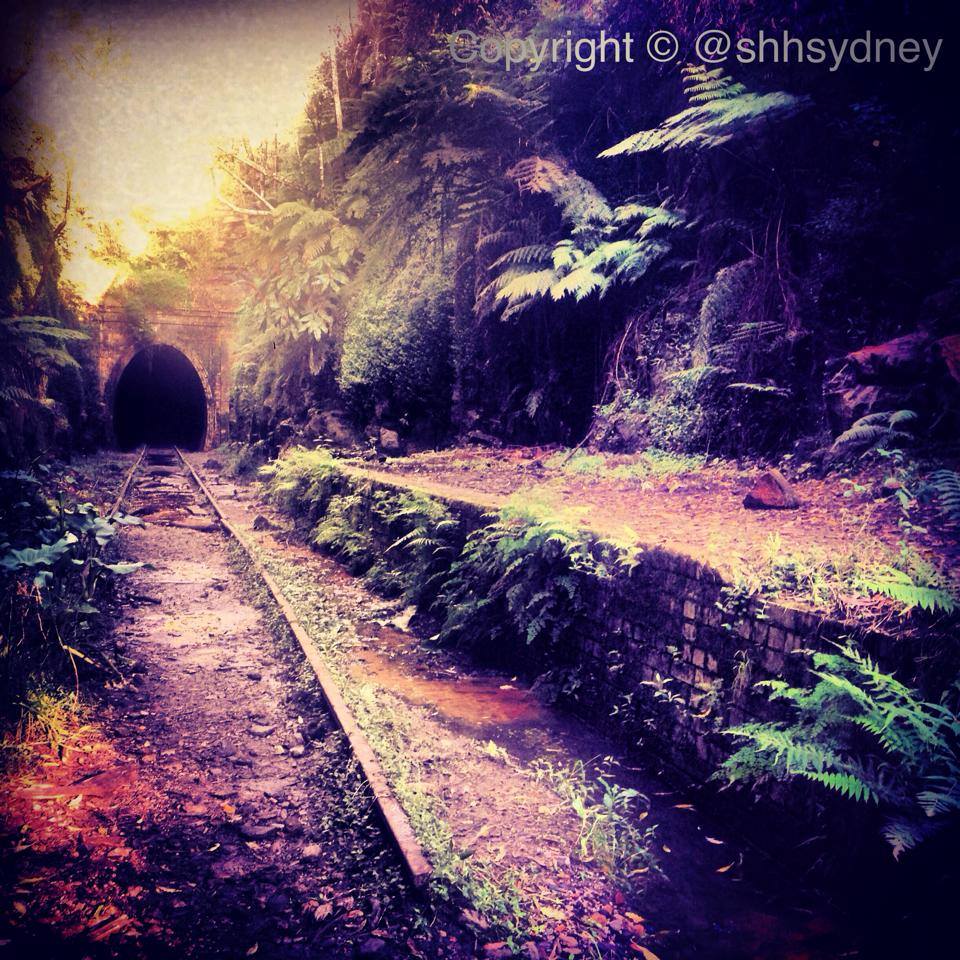 Admittedly, I wasn’t able to resist yelling ‘cooee’ a few (okay at least half a dozen) times down the tunnel, just to hear the unreal echo of my voice reverberating back to me. Probably not the most mature moment, but would do it again for sure.

During heavy rains, the tunnel is known to flood due to poor drainage flow, creating a stagnant lake said to be a unique canoeing spot. Paddling through the darkness, colonies of glow worms are apparently often visible. While this little solo explorer wasn’t so keen to walk the length of the relatively short 80m tunnel just to see some worms, others have and I commend them for their bravery and brilliant photos documenting their adventures. Legend has it somewhere down the stretch of tunnel are visible remnants from its former glory days as a mushroom farm, including an old tractor – someone with more guts than me will have to confirm or deny that one!

There are hushed whispers of ghost stories and hauntings, due to two confirmed deaths that occurred on the old South Coast train line. Am not one to believe in ghosts, but the factual circumstances surrounding the hauntings are right up my history and crime channel loving alley.

The first incident occurred on June 13, 1895  when young coal miner Robert Hales was struck by the steam train while walking along the track. The tunnels were a known shortcut used by locals and it’s said though he tried to run, he couldn’t make it to the end of the tunnel. The steam train struck him, his body was sliced in two and the parts found some distance away from the track. That’s some pretty grisly Dexter-style stuff right there.

Then on August 14, 1912, punter John Joseph McNamara having reportedly just won big at the Sydney horse races boarded a train back to Helensburgh, but never arrived at his destination. His battered body was later found on the tracks of nearby Otford tunnel – he’d suffered severe head, chest and neck injuries and his winnings had mysteriously vanished.

Unconfirmed rumour also has it that a young man once hung himself in the tunnel. While the gaping mouth of the tunnel certainly does have an eerie sense about it, not sure it’s the kind of place to pick for your last spot…likely it’s just an old ghost tale kids invented to entertain themselves before the internet was invented. Spooking yourself out by walking down the tunnel and being enveloped in the blackness is probably the olden day equivalent of saying ‘Candyman’ in the mirror seven times!

Sticking to the facts, The man who officially lays claim for discovering coal at Camp Cove and settling the Helensburgh town colony  is, according to the history books (i.e Wiki) a bloke by the name of Mr Charles Harper. He played a big role in the development and construction of the new town and while there are conflicting reports on this, he’s also credited with naming Helenburgh after his daughter Helen. Harper died under premature and tragic circumstances on August 4th, 1888, when he was killed after a wire rope which was hauling an engine, snapped and hit him. Harper died a short time later, but his legend still lives on as a key part of Helenburgh’s history.

However, according to this old Sydney Morning Herald newspaper article on 1st Dec 1884, it seems mine manager Harper may have taken a bit of liberty by claiming he discovered all that coal  – the article states after the first attempt to locate coal in the area failed, the mining engineers and crew  were about ready to give up. However, Superintendent Mr John Coghlan encouraged his team to try once more and the boys struck big down below!  Coghlan, who was responsible for bringing the new diamond drill technology to Australia was rightly given full credit in the article for persevering and coming up coal-handed. His company the Australian Diamond Rock Drill Company at 196 Pitt St, Sydney was known to be successful in sourcing minerals from around the Sydney region, so I tend to believe that it was actually Coghlan’s persistence that led to the initial discovery of coal at Camp Cove, not Harper’s.

By the 1880s the Metropolitan Coal Company mine was shipping about 10 trucks of coal per week to Sydney via the railway. It soon became apparent that the single track alignment and steam trains were unable to cope with the congestion, steep slopes and sharp curves Engine workers complained of the intense heat and asphyxiation they suffered when the steam trains stalled or lagged slowly through the tunnels. The smoke, soot and heat that built up was said to be unbearable and although attempts were made to try and improve ventilation shafts and airflow, by 1920 the new double track deviation linking Waterfall to Nowra was completed and the entire original South Coast Metropolitan line was abandoned.

Helensburgh Station, like the others on the track were only in operation for a relatively short 27 years. After that it was converted into a dam reservoir to provide the community with water, until 1951 when tank water was replaced with water supply from Woronora Dam.

In the mid-1950s, local farmers Bill and Jean Anderson had the bright idea to take advantage of the tunnel’s dark, moisture-rich climate and grow mushrooms. They received permission from the Lands Department to use the site for farming purposes and the Helensburgh Mushroom Co Pty Ltd was created, running what’s said to be a pretty successful business up until around 1970 when it was liquidated after the credit crunch of 1960-61 several untimely hot summers destroyed some of the crops. When researching this, I discovered the Anderson family sadly lost their house and live savings…in this awesome interview their son Tom Anderson gives a great description of life in Helensburgh town and mushroom farming as a young lad.

After the family business closed down, Helensburgh Tunnel was no longer of any viable use to anyone – so apart from some vandalism and the odd curious ghost hunter, it was mostly  forgotten for some considerable time.  Given about 30 years of abandonment in the bush, nature had understandably taken hold and the old station site soon became covered under layers of forest debris and sediment from the nearby mine.

In 1995 the Helensburgh Landcare environmental group, in conjunction with the Metropolitan Colliery began a mission to excavate the site and uncover the old line. The tunnels and a 24m section of platform were found still intact underneath several metres of muck. The original Helensburgh Station sign was found buried in the adjacent gully. While the brass lettering had long since been removed, the old sign was restored with white lettering. Unfortunately, this sign is pretty popular with thieves and has been vandalised several times. It was sadly missing during my exploration.  However I hear it may have been replaced since my visit, so hope it’s been returned to its rightful place and left alone this time!

The Helensburgh Tunnel is no owned by RailCorp and is now controlled by the NSW Department of Lands. The site is now part of the Royal National Park and Garrawarra State Conservation Area. Personally, I’d love to see the old South Coast Railway line be sympathetically restored and made into a historical tourist attraction, complete with a working (electric) version of the old steam train on the single track. Many people find NSW rail history rail interesting for various different reasons – I can really see a Victorian-style train trip through the picturesque valley proving as popular as the Blue Mountains Zig Zag railway.

The official Helensburgh website claims their little district is ‘a hidden gem amongst the bush’ and they’re spot on – discovering the old station is quite like finding an opal in the bush, move just a bit and bright flashes of greens and blues jump out in front of your eyes against the browns of the gorgeous gully. There’s even an op-shop at the top of the hill, which I totally ducked into on the way back, of course.

While I only had time to visit Helensburgh  Tunnel on this occasion, would love to return and explore the other five station sites and maybe that op-shop as well!